Effective ways to sell your film

Hollywood is a “buffet” – everybody wants to eat before you!
Robert M. Jones*

You spend money to produce your movie, to pay the actors, and when you finally sell your film, there’s no money left. Sales companies take 25% for their services, 25% for show expenses, and then they charge you for trailer and marketing. As a result, the first $125,000 of sales revenue is kept by sales companies.

The 90% of independent films produced today are not sold. You can’t keep making movies, if you don’t know how to sell it. In our day, you need to spend as much time to sell movies as you spend to make it.

To sell your film you can:
• find a distribution company or sales agent;
• promote and sell it yourself;
• share the profits by placing your movie on createspace.com

Having a major studio, famous director and cast can make it easy to sell a film. Distribution companies are hunting for those films. However, most big studios have their own sales departments, and movies with big stars sign distribution agreements even before the production starts.

The independent films are a huge growing market today. Even big companies and agencies have independent film departments, where they produce, distribute and acquire low and medium budget films.

If you don’t have big stars in your film (at least you should have B and C actors), an original story or popular genre may attract buyers as well. Try to contact big companies first. Try to reach the main person in distribution or acquisition department. Usually they won’t transfer you, because they don’t know you. Get in touch with assistants. Find out their boss’ personal email. Send the trailer. Don’t forget to make follow up calls.
Not every distribution company can really sell your film. The market is complicated and changes very quickly, especially international market. I know a filmmaker who had bad experience with unqualified sales agent. He signed an exclusive deal, but the agent didn’t sell his film for the period of one year. Now the filmmaker is trying to contact other companies, but nobody wants his film any more. He has to lie that he recently finished the film!
Before you sign a contract, learn more about the company. How many movies do they have in their library? What kind of movies? Find out the box office gross of films that they have sold.
The most effective way to get the profits of your film, according to Robert Jones, is to promote and sell it yourself. You can contact the buyers directly and avoid paying an agent. The domestic market is essential. If your film succeeds in your own country, the international buyers will find you. Ideally, you can find potential distributors before making the film. Certain story ideas can get international financing and even foreign state funds.
Film festivals provide an opportunity for unknown filmmakers to get their movies in front of a real live audience and to have their films reviewed by professional critics. Filmmakers whose movies get accepted into a festival also get valuable press attention and exposure to prospective agents and buyers.[1]
The great thing about Cannes Festival is the Film Market. Unlike the competitive Cannes Festival selections, Marché du Film (the Film Market) accepts submissions from any filmmaker. By subscribing to Film Market, you get access to the database of buyers all over the world.
Marketing is very important. Each new movie is a new brand. But the marketing campaigns like TV and radio ads, trailers in movie theaters, prints in newspapers and magazines, posters are very expensive.
Robert Jones strongly recommends marketing via Internet:
“Make a website for your film, put a good trailer and contact details. Send the link to the buyers. If movie is good, the buyers will contact you.”
If you don’t want to invest in your own website, you can sell your film using createspace.com and get most part of the income. This is a new service from amazon.com. They make profile for your film, burn copies “on demand” and ship it to the buyer. You receive a direct percentage of every sale. How effective is it? Well, you don't have to worry about doing any duplication or fulfillment. But the service doesn’t include marketing. You still have to promote your film and search for buyers yourself.
* The article is based on interview with Robert M. Jones, the president of IPA ASIA PACIFIC and buyer with 28 years’ experience in film business.
References
1)Watson, Stephanie. "How Film Festivals Work." 22 October 2004. /http://entertainment.howstuffworks.com/film-festival.htm> 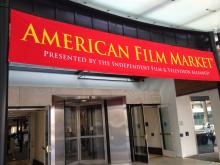